USAF Vet Bottomed Out Then She Became A Shining Star

A Life of Purpose.  What’s yours?

Here’s the story as told through her poem, that starts out about her sitting at a railroad crossing pondering her purpose in life and suicide. Then, giving herself permission to live!  Your brief mission: watch her video story before you leave this post.

U.S. Air Force vet and trainer of companion dogs for vets, De’ has found incredible support and mentoring with her business family.

of change from contemplating death to helping change the lives of others.

If you don’t have speakers or can not watch the video here is the poem she wrote, which she also shares in the video:

I come from a household where I looked just like the man that cheat, beat and walked out on my mother. My mother’s favorite child was my brother.

I was the daily reminder of my mothers broken dreams. I received the retaliation my father wasn’t there to receive, so I joined the Air Force. Not to serve my country, but to run away and hide. But 8 years later I learned that at least 18% of combat vets die by suicide. Post Traumatic Stress Disorder is a silent yet effective assassin.

And I’m not sure if you remember memorial day weekend 2011.  But let me tell you what happened directly before you happened to call.

I had deliberately, calmly and purposely decided I would fall. Research had revealed that the train track barrier where 91st Avenue meets Grand had a 3 second delay.

First I would have a conversation with God, then I would be on my way. I was broken, shattered, tattered and every other word you could use to describe beyond hope. So I prayed in the parking lot of Home Depot:

“God you created the world in 7 days, if you wanted to you could save my life. I’m 26. I was suppose to already be Korie’s wife. So I’m willing to do things your way, I can change. I’m willing to give up. I will never question the orders if you just send me someone who can teach me what to do.”

My phone rang and it was you.

You said you were having a little cookout with some of your mentors and you wanted me to meet them because they changed your life. Probably saved it.

Suicide thoughts and low self-esteem turned into undefeatable, just look at my team. You taught me to make peace with my past so that my future happiness could last. You tailored me into getting Korie back. Come to find out he still adored me.

I know I say I want to be like you all the time. I mean more than the kindness, the communication, entertainment and all that you have to give. I mean I want to be so inspirational people give themselves permission to live.

Tags: Life of Purpose, suicide, USAF, veteran
Posted in Blog, Documentary Video | Comments Off on USAF Vet Bottomed Out Then She Became A Shining Star

Oxygen Instead of Medication

Oxygen Instead of Medication

Daily there are 22 to 30 Veterans dying by suicide and many believe these are completely voluntary acts. Many say suicide is a cowardly act and I say these people do not know the facts behind these suicides. 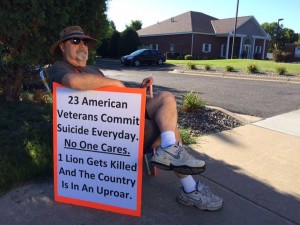 For the last four or five years I have been very confused and shocked why more people didn’t ask the question “What can I do to help stop the Veteran suicide rate? Or something similar.

John said: “Taking your own life is a personal choice. The lion did not have that choice!”

John said: “If the statistics on that sign the man is holding are true, we would have over 8000 suicides a year. There will be no more vets left!”

Eric said: “I love veterans. I do. My dad served in Nam. But this is just ignorant. Vets aren’t endangered…glad this gentleman is shining some light, but do it in a smarter way. Suicide is a choice.”

Godniel said: “The lion did not commit suicide… those 23 people per day was self inflected… they don’t care.. I don’t care… learn to love yourself.. if you dont you can’t truly love anyone else.”

Emmily said: “The people who took suicide decided that, but the lion didn’t!”

Bella said: “Well I don’t pity anyone who commits suicide. You’ve made your choice.”

Some of the symptoms for PTS (Post Traumatic Stress) and TBI (Traumatic Brain Injury) are;

The VA protocol for PTS and TBI treatment is the use of multiple psychotropic drugs, frequently the Veteran is prescribed 5 to as many as 25 drugs per day. These drugs have synergistic effects and many have “black box warnings” about causing suicide ideation.

A psychotropic drug is a chemical substance that crosses the blood–brain barrier and acts primarily upon the central nervous system where it affects brain function, resulting in alterations in perception, mood, consciousness, cognition, and behavior. These include anti-psychotics, antidepressants, anti-anxiety drugs and hypnotics. The “harm” caused by these psychiatric drugs can include violent behavior, uncontrolled aggression and suicide.

Do you still believe that a Veteran suicide is a “Voluntary act”?

Tags: lion, suicide, uproar
Posted in Blog, Died by Suicide | Comments Off on Lion vs Veterans