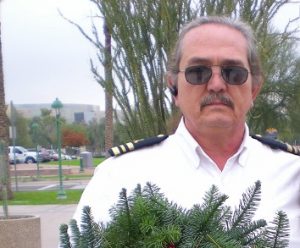 Gordon Brown is the founder of Team Veteran LLC, and the nonprofit Team Veteran Foundation, Inc., he served in the United States Navy during the Vietnam War 1972-1980. As a MM3 (E-4) he was qualified as the Chief Machinist’s Mate of the Watch (Top Watch) in the Aft Engine Room (AER) aboard the aircraft carrier USS Oriskany CVA/CV-34. As a MM2 he transferred to the carrier USS Ranger CV-61 as a Leading Petty Officer (LPO) and Top Watch for #3 Main Machinery Room.

He served in Guam in the mid 1970’s assigned to the USS Proteus AS-19 and worked with several government agencies to investigate and stop a major drug smuggling operation that was moving heroin from Thailand through the island of Guam bound for the Continental US aboard Pan Am Airways jets.

Transferred to the Naval Drug Rehabilitation Center (NDRC) at NAS Miramar, where he was promoted to Petty Officer 1st Class. MM1 Brown was a Senior Counselor, Suicide Prevention Officer, Military Liaison Officer for Narcotics Anonymous and initiated the therapy program that eventually became the standard core-therapy for the entire Naval Drug Rehabilitation programs worldwide. While stationed at NDRC he graduated Summa Cum Laude with a BS in Behavioral Science. He was discharged September 19, 1980 and three months later received a direct commission as a LTJG in the Navy Reserves after receiving his US Merchant Marine License as a Third Assistant Engineer.

He proudly served in the United States Merchant Marines as an Engineering Officer from 1981-1993 and left the USNR as a LCDR. He has a passion and love for this country and the men and women who have proudly served our Nation through Military Service. He is also a service-connected disabled veteran and also experienced a near fatal Traumatic Brain Injury (TBI ) in civilian life and this affords him a unique perspective on the challenges that face our Veterans and their families associated with this injury.

[See his journal on his HBOT treatment]

He founded Team Veteran LLC to create a sustainable funding stream for non-profits like Team Veteran Foundation and others that serve our Veterans, Military, their families and those families of the fallen ones.   Gordon has assembled a team of devoted people that are dedicated to the mission of Team Veteran.

Join Team Veteran and help us assist those who have and continue to protect our freedom and the freedoms of others throughout the world.